Every software development team makes build-vs-buy decisions on a regular basis. For most coding problems, someone is offering a packaged or white-label solution. The decision whether to purchase a tool or develop an alternative in-house – to ‘build or buy’ – is typically made ad-hoc based on cost, existing engineering skillsets and organizational culture.

However, barring the most ardent of open-source purists, it’s rare for an organization to do just one or the other; instead, developers will rely on a mix of purchased, proprietary and open-source technologies.

With that caveat in mind, let’s look at data infrastructure for big data projects: while here too any decision should be made on a case-by-case basis, we’ll suggest a few guidelines or general considerations that you should apply before choosing to go one way or the other.

Planning a change to your data architecture? First read our comprehensive Roadmap to Self-service Data Lakes in the Cloud to learn how you can achieve the performance and scale of a data lake architecture, without the technical complexity.

Defining ‘data infrastructure’ can be tricky, but let’s keep it simple and use the term to refer to backend technologies used to store and access data, and whose primary function is to enable other products or systems to work properly. When everything is in order, infrastructure should be invisible to data consumers outside of specialized organizations such as IT, DevOps, DataOps or Data Engineering.

Infrastructure is different from features, updates and bug fixes. The latter generate tangible value for the business, i.e.: they make the software better, more useful, mores sellable, etc. Whereas with data infrastructure, the best case scenario is that everything is working as expected; doing a perfect job will still not make your software more useful or sellable (while doing a bad job can be disastrous, which makes infrastructure work all the more thankless).

In other words: the connection between infrastructure and business value is murky. It’s difficult to explain to the CEO why you need to spend $200K on a data quality project rather than a new product feature. Hence most organizations will try to minimize the time and effort they spend on infrastructure – more so than for other types of software development projects.

If controlling costs is the key factor in most infrastructure purchasing decisions, you might be tempted to bias towards in-house development using readily available open-source big data processing frameworks (Apache Spark, Hadoop, Apache Airflow, and the list goes on and on).

However, as many engineering teams have learned the hard way, big data frameworks are no picnic for developers who don’t have extensive experience with them – there is an extremely steep learning curve, and ongoing optimization is a bottomless time sink. If you end up needing to increase headcount, or to devote a lot of your engineering resources to building and maintaining infrastructure, the total project cost will be astronomical.

You should lean towards buying rather than building if: If your most talented and best-paid engineers are spending the majority of their time on infrastructure, your costs are likely going to be higher than you would be paying in software licensing costs.

While buying infrastructure products can be a good fit in many cases, it is not a silver bullet that applies to every scenario. If your organization already has a prominent and highly effective data engineering team, it might make more sense to keep using the development frameworks that they know and love. If your use case is extremely specific and will require a lot of custom development to do what you need, you might have no choice but to develop it in-house. 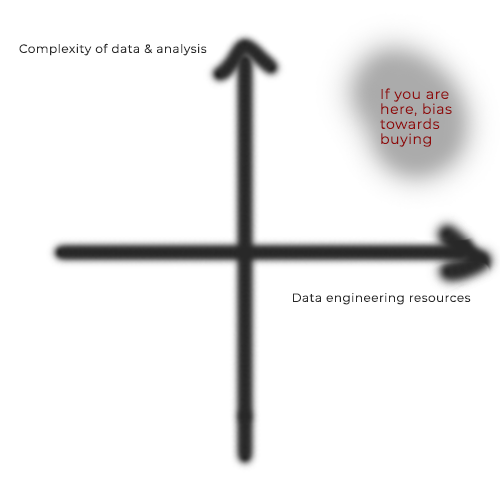 You’re better off building rather than buying if:

Finally, we should once again stress that the decision is never a binary choice between one or the other, nor is it a single decision. You’re probably going to buy some components, use open-source technologies for others, and do some development in-house from scratch. We’ve suggested a few guidelines for considering whether to buy or build a certain piece of technology – but it’s up to you to figure out what works best for your team at any given fork in the road.